The demo will be implemented using the original Shazam algorithm. There are two parts to the application.

The fingerprint generation and matching process can be seen in the following diagram. In this post I will give a high level overview of this architecture. I will follow this up with another post on the implementation details and results. 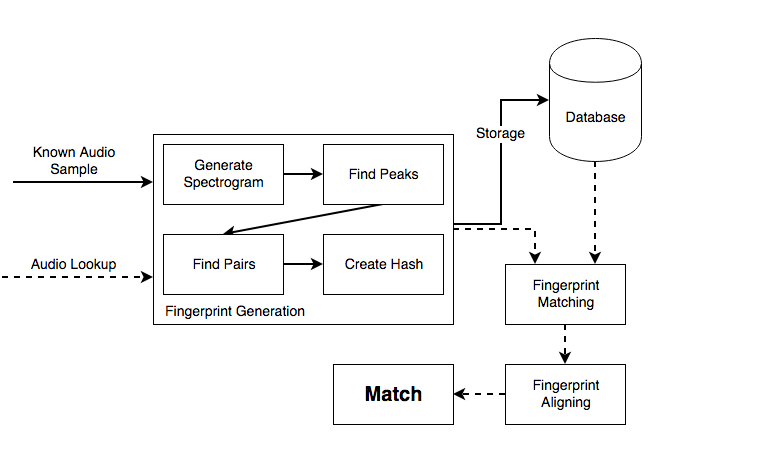 First, a spectrogram of the audio is created using the short-time fourier transform (STFT). This creates a time-frequency graph that stores the amplitude of each frequency at each point in time. An example of a spectrogram created in with program can be seen in the following image. 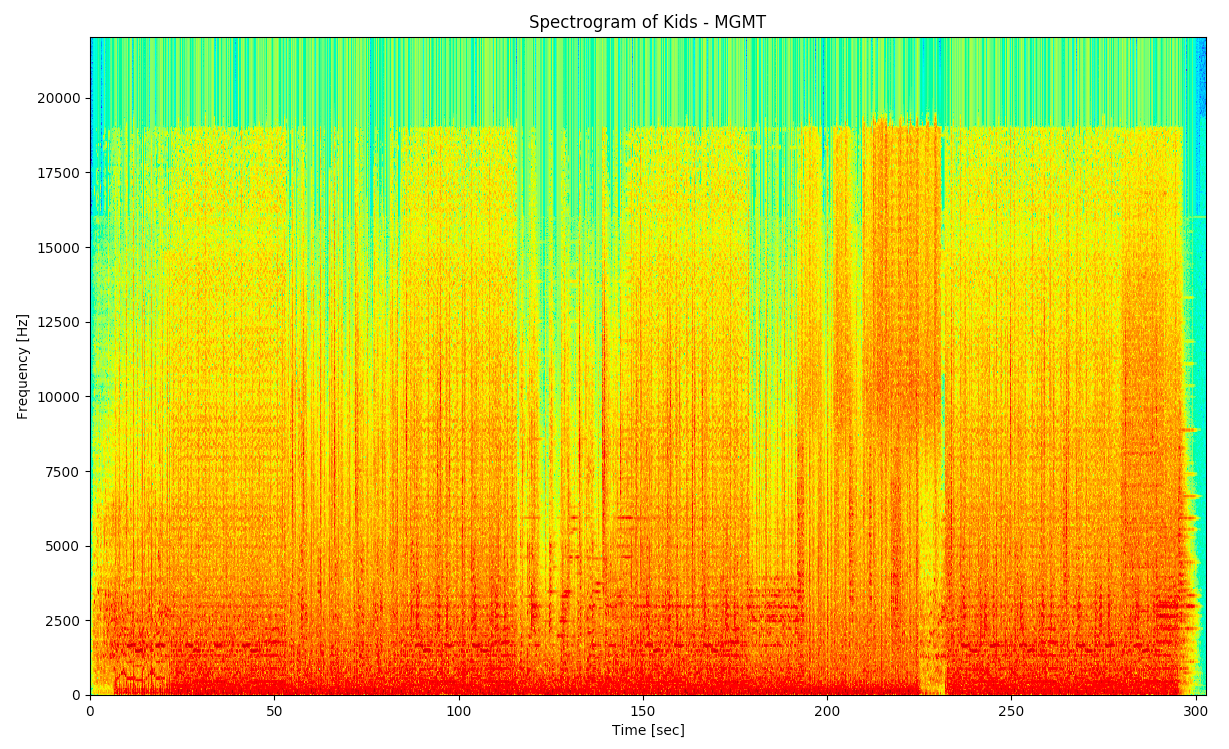 Second, the spectrogram is analyzed and the peaks are selected. A time-frequency point is considered a peak if it has a higher energy content than all of its neighbours. In the Shazam paper the output of this process is a “constellation map”.

Selecting high energy points helps make this algorithm robust to noise, as most of the noise will simply be discarded.

The following figure shows an example of a constellation map generated with my program.

Each peak point is used as an “anchor” and neighbouring points in front of it are selected to create a pair. The exact distance from the anchor point can be configured to change the accuracy of the implementation. A larger distance will be more accurate as it will create more pairs. However, it could also require a significant more amount of storage. A trade off needs to be made.

In the Shazam paper this process is called combinatorial hash generation. Finally, the a hash is created for each pair. It should be noted that this is not a cryptographic hashing function as it does not follow the necessary properties. Each hash is composed of

This hash is combined with the time offset of the first point, as it will be necessary for matching, to create a fingerprint. The fingerprints generated for each song need to be stored in a database for fast and easy access later. Since a single song can have thousands of fingerprints, the number of songs I plan to save and amount of storage available should be carefully considered.

I will simply store each song and fingerprint in the PostgreSQL database. There will be a one-to-many relationship between fingerprints and songs.

For each song, I would like to store as much information as possible. I plan on reading metadata from MP3 files to access the title, artist, and album in order to provide a better user experience when a successful match is found.

For each fingerprint, it is crucial to only store the necessary information. This is the hash, time of the first point, and song id. Millions of fingerprints can easily be generated so making this table as small as possible will benefit me in the long run.

When an unknown audio sample needs to be identified, its fingerprints will first be generated, and then database will be queried for matching fingerprints. A naive approach would be to simply selected the song which most of the matching fingerprints originated from. However, we can make the assumption that the time between successive fingerprints in both the unknown and known sample are the same.

This is illustrated in the following figure. A diagonal is present as matched fingerprints occur successively after each other. The time offset for these fingerprints is the same, indicating a match. The above steps will be combined into a simple Python application. Looking up a song will consist of recording audio from my laptops microphone and attempting to identify the source song. During testing I will introduce noise into the identification process to see how robust my implementation is. I will also try with several different microphones, to see how the microphone qualify affects accuracy.